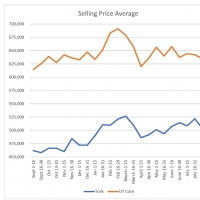 The following charts are tracking recent trends in the condominium market in Markham, Richmond Hill and Vaughan in comparison to DT Core.

To compare apples to apples only one and one plus one units are being tracked.

The data is tracked starting September 1, 2019 to illustrate the most recent trends and the impact of Covid-19 on this segment of the real estate.

The goal of this is also to compare the behaviour of 1 bedroom condos in these parts of York Region to DT core condos as presented with these charts.

For the purpose of this article Markham, RH and Vaughan will be called York Region.

After the craziness of February and March, the sold to list ratio continue to be very steady all the way up to August 15, DT Core shows a bit of a weakness in first half of August.

The days on the market had a significant increase in May and June, that increase was actually much more significant than in DT core, the chart for this category looks stronger for DT than York region.

It’s interesting to note how this segment of the market in the York region behaves by itself and also how it compares to it’s counterpart in DT Core. We are not seeing the crazy bidding wars we had experienced prior to covid, however we have seen some units sold at very strong prices, and number of units are receiving more than one offer (this maybe anecdotal based on our experience) , the condo market in York has been quite strong, one would could describe it as a border line between the sellers market and the balance market, this segment of the market looks quite a bit stronger than DT core at the moment.

DT core is much more affected by the short term rentals, work from home, concertation of the universities and the students studying remotely, York, and especially Markham shows strength partially due to demand from Asian population of the GTA.

All of the above has a significant affect on the rental market, in the recently posted article by Zoocasa we can see the increase in rental units up for lease by the region, on average the number of units increased by 45% with C01 (the heart of short term rentals) increasing by 80% significantly affecting the renal rates. While I don’t have similar stats for York region you can see that the Toronto areas bordering York region such North York, Willowdale etc, have been affected very little by the increase in rental units flooding the market. This leads me to believe Markham, Vaughan and Richmond Hill rental market have been impacted less than the DT Core, which may in turn help understand why these two markets have been behaving differently in the resale department.