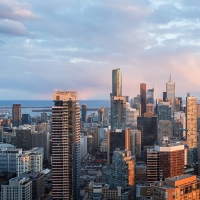 The following chart is tracking recent trends in the condominium market in DT Toronto, specifically the following communities:

To compare apples to apples only one and one plus one units are being tracked.

Eliminated are properties sold at over $1M as these luxury units do not represent the needs of average consumer.

The data is tracked starting September 1, 2019 to illustrate the most recent trends and the impact of Covid-19 on this segment of the real estate.

It was an interesting a crazy year for all of us, the time period covered in these charts reflects this quite well. After the summer of 2019 the DT condo market was very strong and steadily climbing all the way to the end of the year. The first two and half months of 2020 marks the period I would describe as sellers’ market on steroids with majority units receiving multiple offers and selling over asking. March 15 everything came to a halt, it seemed like the world is about to end, the real estate froze. Things started moving again in May which I would describe as a recovery period, although the recovery period is quite different from freeholds.

April was the month we saw a significant drop off in pricing in comparison to the first couple of months, and even late 2019, the average price of the units sold in the first half of April was $620,229, that’s a drop of $70,664 or approx. 10% from the heights of the February, and was comparable to prices in September/October 2019.

In the following months the prices have rebounded to roughly $655K range in May and June, July was approx. $642K, and the first half of August was roughly $635K.

September through November has confirmed the downtrend, in the second half of November the average price of the condos sold was $589,521, the lowest during the period tracked.

In the middle of November was the announcement of the vaccine signalling potential change in the condo market, and the change indeed happened. The second half of the November had a noticeable shift in the condo market (there is a bit of a time lag between the sales being reported and offers accepted), and it followed through even stronger in the first half of December. While the average price change is not significant with the average price of $594,720, it looks like the downtrend, at least for the time being may have been broken, and the prices remain stable. The first half of December shows YOY drop of 6%, and drop from the peak of February of 14%.

Despite the fact I have narrowed the criteria quite a bit to ensure the conformity of the units analyzed, the make up of the units sold may affect the average price for the period, in addition there may be a small change in numbers as few sales may be registered in the coming days.

Ignoring the slow months of December and January due to holidays the volume typically ranges between 100 to 140 units sold in a semi-monthly period. February and March 2020 were hoovering around the top of the range, and when covid hit the volume was reduced by 75% in the first half of April. The volume slightly increased and continued to be low until the end of May, second half of June and first half of July had volumes of almost 140 units sold respectively. The second half of July actually had the highest volume in the period covered of 162, that IMO can be explained as a catch up to the second quarter of the year which was really slow in volume.

Between August to November 15th,  the volume has been pretty steady ranging from 109 to 135.

While the average price for the first half of December hasn’t moved much, the volume of transactions is quite interesting and indicative of the change in the market.

After the craziness of January to March 2020 the sold to list ratio has held steady between 99-102 after March which is consistent with 2019.

During the strongest market of February to March 2020, the days on the market were between 10 to 16, I am ignoring the higher DOM for January due to holidays. During April and first half of May the DOM hit 20, and was between 14 and 18 in the following months. In August 2020 we hit 20 again and it has been gradually increasing since hitting the highest mark of 28 in the second half of November. The DOM for the first half of December 2020 is 34, there are two ways of looking at it, the market is getting weaker, or the units which have been sitting on the market for a long time are finally selling.

With the announcement of the vaccine in the middle of November we have experienced a shift in the DT condo  market, I was eagerly awaiting for the first half of December data to see if the numbers confirm what I saw was happening.

I noticed a significant uptick in the transactions, less inventory, units which were sitting on the market were finally selling, the sellers were terminating the units and not putting them back on the market.

And the data surprised me in some aspects. I was expecting more increase in the average price, that didn’t happen, yet at the same time the average price didn’t go down. Another surprise was DOM, normally the market strength or improvement would result in lower DOM, and the opposite happened.

What wasn’t surprising was the volume of transactions, I was expecting a good number but the YOY increase of 77% due to the seasonality was a very strong number.

What’s in store for us is obviously unknown, despite the strange year we can expect some typical seasonality for the second half of December and early January with holidays upon us (not to mention lock downs and some condos not allowing showings), we are likely to have new federal foreign real estate tax coming, and possibly empty home tax in Toronto.  Another burning question is if the listings which were terminated in the last 4 weeks will hit the market again in the spring. The next 6 months will be very interesting in Toronto’s condo market.