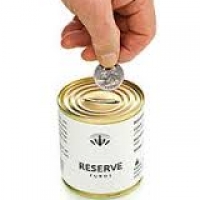 In our previous blogs we have explained step by step process of buying resale condominiums, and deeper into the most important document associated with the purchase, the status certificate, in this blog we would like to take it even further and explain one of the most important aspects of the status certificate, the reserve fund study, in more details.

What is a reserve fund.

In the nutshell the reserve fund are money put aside every month for future repairs and replacements, it is collected monthly as part of the common element fees. It is regulated by the Condominium Act to protect the consumers, to allow for smooth operation of the building, and to stop them from being run down to the ground. It should be noted that the reserve fund can’t be used for regular maintenance, nor it can be used for installing new common elements (ei if there was no swimming pool, the funds for the installation of the pool can’t be drawn from the reserve fund).

What is a reserve fund study.

The reserve fund study is a long-term plan which helps estimate the amount of funds needed to be put aside every month in order for the major repairs and replacements to be properly funded. The estimate is based on the current condition of the common elements, and the estimated costs, frequency and time of the replacements and repairs, assumptions such as inflation and interest.

When and how often.

For new developments the reserve fund study must be prepared by a qualified engineer within a year after the corporation registration, and the study must be updated every 3 years after that.

Types of the reserve fund studies.

The class 1 reserve fund study is most comprehensive, detailed and in-depth of the three, it includes site visual inspection of the condition, inventory of the components, preparation of the notice of future funding, preparing the reserve fund plan, evaluation of fund status and estimating the life expectancy of the major components. This type of study is done within the first year of registration, and if needed in the future.

The class 2 reserve fund study is just a step below class 1, it involves all the evaluations and site visit, but it doesn’t cover the inventory of the components.

The class 3 reserve fund study is the least comprehensive of the three, it does not include site visit nor the visual evaluation, it includes the preparation of the funding plan, notice of future funding and evaluation of the fund status.

It’s important to remember that the reserve fund study is based on the assumptions, experience of the engineer, knowledge of the components, assumed maintenance, estimated future costs. While we hope the figures will be close, we can’t expect the study to be an exact prediction of what will happen in the future.

Balances of the reserve fund.

The balance of the reserve fund doesn’t always rise, it can go up and down, after a projected major repair the balance can drop significantly in the year, and as long as it corresponds to the reserve fund study, it’s not a reason for concern.

The corporation must set up separate bank accounts (GIC, saving accounts etc) for the reserve funds.

What is included as part the status certificate.

The reserve fund study document is complex and in-depth, it includes the background information on the corporation, it’s description, inspection report with itemized overview of the major components, information tables summarizing the life expectancy, age etc of the common elements. However in the status certificate package you will only see the summary and expenditure and cashflow tables. These tables will show you the recommended funding plan for the 30 years in the future and it is included in Form 15.

To help understand what it looks like and how it works it’s best to look at the examples, the good and the bad. For privacy reasons we have removed all references to protect the identity, but both are the actual forms prepared for a specific corporation. The good and bad describes the condition of the reserve fund, not the quality of the prepared report.

Example of a reserve fund study summary and tables.

As part of the Form 15 you will likely see few pages and tables, it will describe who prepared the report, for which corporation, when, what would be the average monthly contribution and increase to the reserve fund, the pages have some interesting and highlighted items we would like to point out. 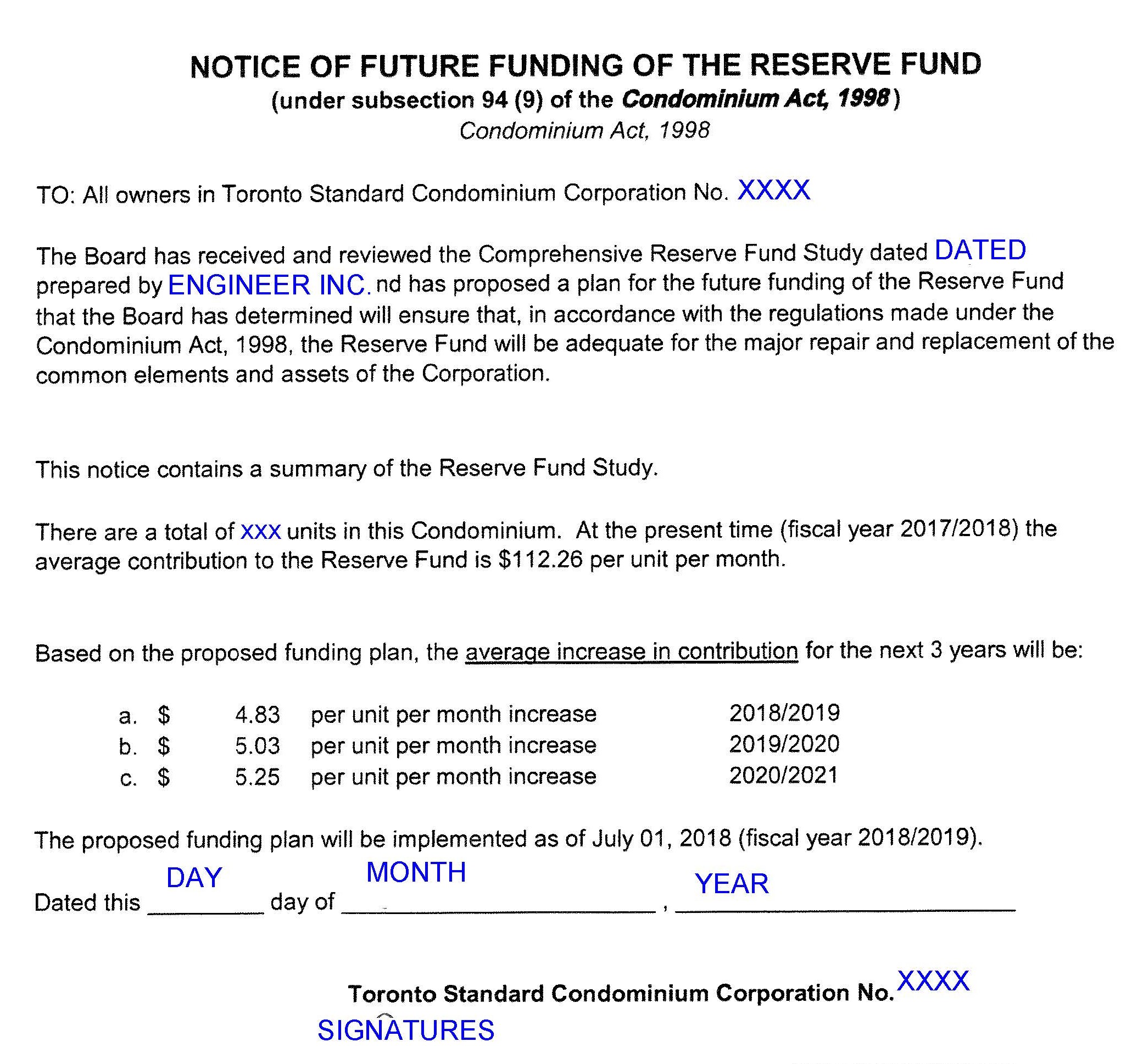 The difference will likely be small and immaterial but it illustrates the concept of assumptions and estimates.

In the closing balance column you can see that balances sometimes go down, the study predicts major expenditures to take place at come point in the future which causes the temporary drops in the balance. In 2047 the study predicts major repairs at the cost of approximately $5M, which will drop the balance to a very low $1.2M, however as long as everything goes according to the plan there are no reasons for a concern because the corporation is prepared.

Now the figures that are most important and interesting we look at column “percentage increase in recommended annual contributions”, and the ending balance of $3,252,796 (the last fiscal year audited by CPA). For the first 3 years the increase is 4.3% followed by 2.7% after. The first 3 years are the most important, the low to mid single digits increases are very desirable, after that there will be a new report and it will likely be revised. In this column you will quite often see constant number after the first 3 years, but many reports will call for higher increases after the first 3 years. I have also compared the final balance for 2020 of $3,252,796 with the actual cash balance of the reserve fund per audited financial statements (not shown here), the actual balance was $3,345,970 so a little higher than the projected reserve fund study balance. 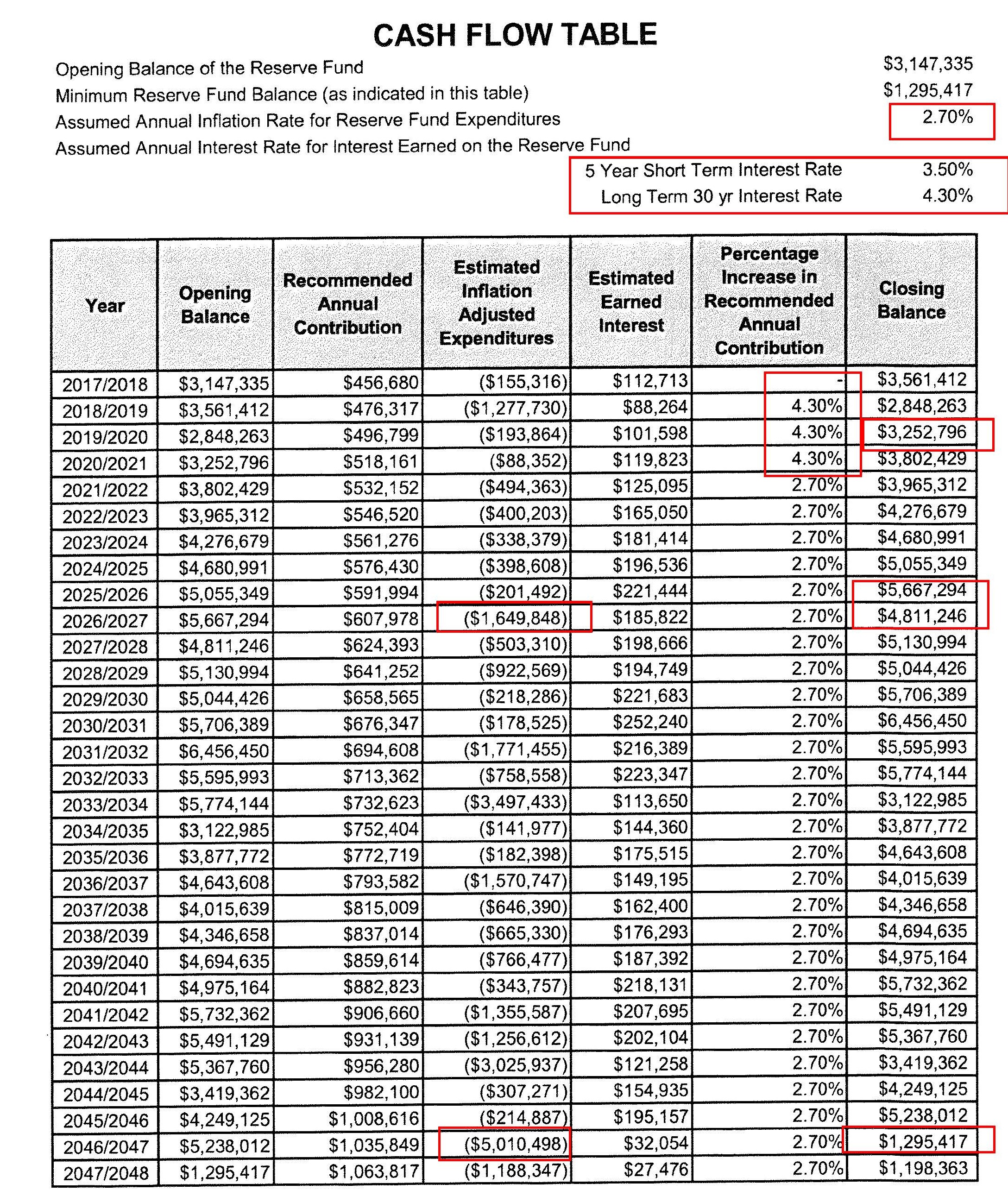 This is really as good as it gets, no issues with the reserve fund study nor balances, there were no other issues with the status certificate, the lawyer reviewed the documents and our buyer purchased the unit.

This particular example is for a condo that is 17 years old, the first potential red flag is the fact that Class 1 reserve fund study was prepared. One could think it’s great since Class 1 is most comprehensive, but on the other hand Class 1 are done in the first year of the corporation, or later on as needed, and in many cases as needed means the condo didn’t get one done for more than 3 years (this was the case here), or the one that was done was not reliable, not reflecting the real condition etc, at the very least having Class 1 done for older building should be a reason to stop and ask why.

The bottom of the page simply states the beginning and minimum balance, inflation and interest rates assumptions, nothing exciting there.

The second page is where I am having a WOW moment. In the annual percentage increases we see 49%, 24%, 19% and 16% for the first 4 years. These numbers would have been acceptable if this was a brand new condo established this year and the reserve fund study suggested such high increases to aggressively build up the reserve fund for the future. I could live with that if there were no other issues, and this was a brand new building, but this complex is 17 years old!!!! In this case if it wasn’t for such drastic increases the reserve fund balance would have fallen below the minimum amount required by the year 2022, and quite frankly it is hitting the minimum balance required of $146,546.

In this case the status certificate was available to us prior to making an offer, there were also other issues with the corporation, the buyer didn’t even make and offer on this property and moved on to look for something else.

If you have any questions regarding the topic please don’t hesitate to drop us a line.